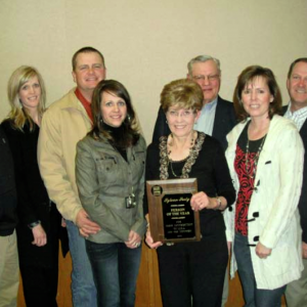 Sylvan Seely, founder of Gem State Irrigation now operating as Golden West Irrigation in southeastern Idaho, has been selected as the Idaho Irrigation Equipment Association’s 2011 Person of the Year. The IIEA Person of the Year is an award given annually to a distinguished member of the organization that has provided many years of service and accomplishments to the irrigation industry and to the association. The award, which is voted on by the officers and board of directors, was given on January 4, at the IIEA membership banquet at the Shilo Inn, Idaho Falls. Sylvan’s son, Stuart, provided a historical tribute before giving his father the plaque. “It was an unexpected honor and privilege to receive this award from the IIEA,” said Sylvan, 76, of Rexburg. “An award like this is meaningful because it comes from an excellent association who is dedicated to improving the irrigation industry and providing scholarships to students majoring in water-utilization fields of study.” “Personally, I love the soil and the application of water to increase the productivity of the land,” said Sylvan. “It has been a lifelong dream to see this improvement happen. This award symbolizes years of hard work, dedication of family, employees, and the support of IIEA.”

Sylvan grew up on a farm just north of Saint Anthony in an area called Twin Groves. He married Gail Jensen in 1958 and soon they started a family. He was teaching school and farming grain, potatoes and hay and milking a small herd of dairy cows. “It was tough farming among the lava rocks,” Seely said. Sylvan entered into the irrigation industry by necessity. He needed some handlines to better irrigate his potatoes so Seely had found four used McDowell lines and had told the dealer in Idaho Falls he would buy them. When he arrived at the dealership the owner said that he threw them in on another big deal to “spice” it up. Sylvan still needed the handlines and through a friend heard about better priced lines in northern Utah, however, these lines were the wrong style,” Stuart recounted. “One night a man called him from a pay phone in Pocatello and told him that he knew where he could find what he wanted. Sylvan didn’t catch the man’s name but wrote down an irrigation company Cornish Utah.  He went down and found he could buy handlines for about half the price,” Stuart said. “That got his entrepreneurial wheels spinning in his head. He could purchase these handlines and resell them saving the farmers in eastern Idaho a lot of money, which would be good for both parties.” So in 1966, Sylvan started selling irrigation equipment along with farming. He was partial to McDowell style handlines and to this day calls them the Cadillac of lines. In the next few years he struggled to find enough lines and fittings to sell to farmers in the upper valley.
Sylvan would order semi loads of handlines and get them delivered to the local farmers then he would take the riser pipes and Rainbird sprinkler heads and screw them into the handlines. He did this out his farm of the back of an old Rambler station wagon.

When Sylvan was ready to name his business he consulted with his father-in- law Owen Jensen. Owen’s advise, name the company so it can expand so Seely and his wife Gail named their company Gem State Irrigation Incorporated in 1970 and opened a dealership in Rexburg.  With this name and great employees that worked with him they began to attract many suppliers like Johnson Pump, Layne and Bowler, Peerless pumps, Aurora pumps and  became the first irrigation dealer to sell all brands of handlines including McDowell, A&M, Ames, Ireco and Thunderbird.  In 1969, Gem State Irrigation became a Valley dealer.

“In 1971 Bob Lee, Sylvan’s brother-in-law became a partner in the growing business,” explained Stuart. “He had his Doctorate in civil engineering and was a perfect fit to help grow the company. With this extra help of a partner, Sylvan could turn to his talents of scheduling the crews and making sure jobs were installed to the highest standard possible and that the jobs were completed on time.”

“One of the great challenges that he had was when the Teton Dam broke in 1976,” Stuart reported. “The shop was flooded and so he got a permit to work out of his garage. After cleaning up the debris, Gem State Irrigation brought in irrigation pumps totalling more than 2,000 horsepower from California to install in area canals to feed the water back out to local farmers. With the reservoir gone, huge projects were put in along the Teton River. Seely was instrumental in these projects that are still running today and are some of the most productive potato seed farms in Idaho,” Stuart said. Through a series of events, in 1982, Gem State Irrigation changed its name Golden West Irrigation. Not only did he have a store in Rexburg but in Idaho Falls, too. This increased his customer base and the demands on his business skills. “In 1988 the Yellowstone fire was heading towards West Yellowstone. Sylvan gathered up semi loads of handlines and portable aluminum mainline from the local farmers and the business and hauled it up to help save the town from the raging wild fire,” said Stuart. “Luckily the fire was in the fall and most farmers were finished irrigating. He used two portable pump stations and his expertise to wet the areas just outside of the city. The people of West Yellowstone didn’t understand what this great effort was for but soon realized the safety that it assured them once they saw the system working.” Stuart recounted.

“Often my Dad comes down to the shop and just checks up on things,” said Stuart. It is still a family business with Sylvan’s son- in-law, Nick Ricks, running the Rexburg dealership and his son, Stuart, running the Idaho Falls location. Roy Jenkins, another son-in-law, is heading up the pump design and repair part of the business. Sylvan and his wife, Gail, are the parents of eight children – seven daughters and one son. They have 28 3/4 grand children and Sylvan loves to go fishing with them either in a boat or on the ice. He enjoys the horse business and just finished watching six of his horses compete in the World Snaffle Bit Futurity in Reno, Nevada. Today, Golden West Irrigation has 34 employees. They operate a pump rig to set deep well pumps, a machine shop to repair pumps and build new pumps; and four boom trucks to set pivots and pull pumps. They also build variable frequency drive panels and sell irrigation parts. The Idaho Irrigation Equipment Association is celebrating its 41st year as an association. Sylvan’s irrigation company has been a member since the beginning. Members include dealers, manufacturers, and distributors of irrigation equipment products and services.
<< BACK TO IIEA PERSON OF THE YEAR PAGE