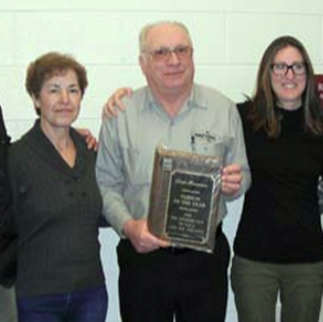 Richard (Dick) Bronson a design consultant with Pipeco Idaho and former owner of Growers Supply, has been selected as the Idaho Irrigation Equipment Association’s 2012 Person of the Year. The IIEA Person of the Year is an award given annually to a distinguished member of the organization that has provided many years of service and accomplishments to the irrigation industry and to the association. The award, which is voted on by the officers and board of directors, was given on January 9, at the IIEA membership banquet at the Nampa Civic Center, Nampa, Idaho. Longtime friend and colleague, Karen Hopkins, provided a tribute before Bronson was awarded a plaque. After the award ceremony, Bronson said this about the recognition, “I am humbled and gratified for the support of all my coworkers at Pipeco Idaho and friends and colleagues within the irrigation industry.” Bronson, comes from one of the first sprinkler irrigation companies in Idaho. Growers Supply Company was established in 1947 by Ted Riens and Karl Bronson, (who was awarded the 1996 IIEA Person of the Year). “It was an innovative family owned and operated company active in installation, design and operations of irrigation systems, including being involved in one of the first drip irrigated orchards in Idaho,” said Hopkins. Bronson joined his father in developing Growers Supply as well as coming home to work the family farm operation after he served his country in Vietnam.
​
Bronson and his wife, Marcy have worked hard to keep traditions and innovations combined hand in hand to preserve a “century farm” on which they are establishing a tree nursery as well as operating a relatively new venture, Lone Pine Corporation, a family farm in which Jim and Carie Bronson, the fifth generation of the Bronson family, are working with their parents to carry on Karl’s legacy of excellence. “Karl passed away in 2004 but his influence can clearly be felt daily on the Bronson Farms, both in Payette & Cassia Counties,” said Hopkins. Bronson has been a member of the Idaho Irrigation Equipment Association and served as treasurer for two years. He also holds memberships in the Idaho Nursery and Landscape Association and the Idaho Horticulture Association. He attended the University of Idaho and is a University of Idaho Master Gardener, Veteran of Foreign Wars and a member of the American Legion. He has served his community as an instructor for the Payette Master Gardeners Program, served on the Payette School Board and the Lower Payette Ditch Company Board, as well as being a commander for the Veterans of Foreign Wars. Bronson currently works as a design consultant with Pipeco Idaho which purchased Growers Supply Company in 2006. He is also currently serving on the Idaho Soil Conservation Commission, Payette County Planning and Zoning and on the Idaho Horticulture Society Board. “Dick has always been generous with his time and talents for the greater good – working long hours on the farm after working long hours at the office,” said Hopkins.
<< BACK TO IIEA PERSON OF THE YEAR PAGE