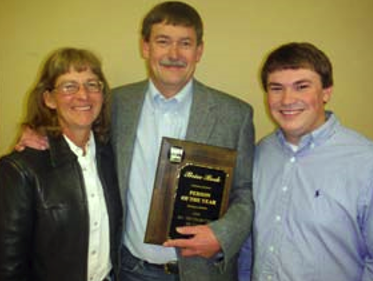 Brice Beck, co-owner of Butte Irrigation, Paul and Kimberly, has been selected as the Idaho Irrigation Equipment Association’s 2013 Person of the Year. The IIEA Person of the Year is an award given annually to a distinguished member of the organization that has provided many years of service and accomplishments to the irrigation industry and to the association. The award, which is voted on by the officers and board of directors, was given on January 15, at the IIEA membership banquet at the Morey’s Event Center, Burley, Idaho. Longtime friend and employee, Tad Barrie, provided a tribute before Beck was awarded a plaque. “It was an unexpected honor and privilege to receive this award from the Idaho Irrigation Equipment Association,” said Beck. “The IIEA, which is celebrating its 43 third year as an association, is one of the best associations that I have been associated with as it is made up of the best suppliers, dealers, manufacturers, and consultants in the business,” Beck explained. “This award is even more special because of all of the great friends in the industry and family members that were in the audience,” said Beck who served as the president of the IIEA in 1993. He has also supported his employees as they have volunteered time with the association. “The members of the IIEA are like an extended family and some of the best friends you could ask for,” Beck said. He also thanked all of his employees that have made Butte Irrigation what it is today, claiming they are the best employees in the industry.

Beck grew up on a farm south of Burley and got his first taste of the irrigation Industry moving syphon tubes and hand lines. He worked for his father who taught him a good work ethic and the importance of being honest and exceeding expectations. Beck graduated from Utah State University in 1983 and was enrolled in graduate school in 1984 when he was offered a job as an agricultural loan officer for Valley Bank. He worked for Valley Bank for five years and was the Burley, Idaho Branch Assistant Manager and Vice President when he was approached by Dale Adams and offered a job to be the manager of Butte Irrigation in Paul, Idaho, in the fall of 1988. He accepted the job and later became a partner with Adams. Butte Irrigation, which began in 1975, has grown into one of the largest irrigation dealers in the area. They sell most major brands of wheel lines, hand lines, pumps, PVC, variable frequency drives, fittings and parts. Butte Irrigation has been recognized as being a top five dealer nationally for Zimmatic Products and has received many other top dealer awards over the years. Butte Irrigation currently has 35 employees providing sales, design, service, installation, welding, trenching, excavation, electrical and parts. In 2013, Butte Irrigation opened a second location for parts in Kimberly, Idaho to better serve their market area.
​
Besides his service with the IIEA, Beck has also served as a charter member of the Rain Bird  Ag Dealer Council and has been elected to two terms on the Lindsay Dealer Council serving as chairman in 1994. He was awarded an Honorary State FFA Degree in 1993 and has served on the FFA advisory committee for over 25 years. He was a member of the Cassia County Fair Board for 13 years and has been a member of the Fat Stock Sale committee for more than 30 years. He served on the College of Southern Idaho Foundation for two years and has been involved with many other educational committees over the years. Beck and his wife, Judi, are the parents of one son, Kade, who is currently a senior at Utah State University. They reside in Declo, Idaho, and enjoy many outdoor activities including archery, trap shooting, golfing, fishing, hunting, and watching sports.
<< BACK TO IIEA PERSON OF THE YEAR PAGE