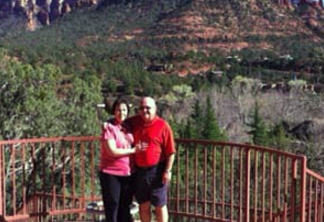 Jerry and Sue Brown, owners of Wish Northwest (Western Irrigation Supply House) have been selected as the Idaho Irrigation Equipment Association’s 2014 People of the Year.

The IIEA Person of the Year is an award given annually to a distinguished member of the organization that has provided many years of service and accomplishments to the irrigation industry and to the association. The award, which is voted on by the officers and board of directors, was given on January 14, at the IIEA membership banquet in Idaho Falls. The couple’s son, Mike Brown, made the presentation and accepted the award in their honor.
​
“This is the first time the award has been given to two people,” said Bob Hand, 2015 IIEA President. “Jerry and Sue are a team and you couldn’t recognize one without the other.”

Wish Northwest is an irrigation distribution company that provides center pivot sprinkler design charts, distributes irrigation parts in the industry including sprinklers, valves, wire, tires, or any other product that is used in the agricultural irrigation market. The couple started the business in their garage in Pocatello in 1994. They now have warehouses in Pocatello and Kennewick, Wash. and have 20 employees.

“Without all of the support from the irrigation dealers, manufacturers, sales reps and all of the employees over the years none of this would have been possible,” said Jerry and Sue from their winter home in Arizona. We would like to say thank you to all of them for their support over all the years. We look forward to doing business for many years to come.”

Jerry was born In Nebraska and raised in Southern California; Sue in upper state New York. After high school, Sue went to nursing school and became a registered nurse. Jerry went to college for a few years but decided to join the US Navy. The two met while Jerry was docked in San Francisco and Sue was in the Bay area vacationing with friends. Mutual friends lined them up for a date.

“On that first date, my Dad asked my Mom to marry him,” said Mike. “She thought he was crazy!!!” They did not get married that night but did stay in close contact. Once Jerry got out of the service they decided to reconnect.
Mike said they met back up in Nebraska and decided to move out to California together where they got married. Sue worked at a hospital while Jerry worked in the construction industry. “Mom and Dad decided that they wanted to start a family but knew that they did not want to do so in Southern California. So they packed up and moved back to Nebraska,” said Mike.

“There was an irrigation dealership outside of town looking for a manager with an accounting background, which was what Jerry had gone to school for before going into the military. Jerry had a short interview with the owner who decided he wanted to hire Jerry as the manager to run his service and sales department,” said Mike.

Jerry had a hard time taking the job, being from Southern California he had no idea what a center pivot was let alone manage people who worked on them every day. Jerry told the owner that the only way that he would take the job was if he could ride along with the sales and service crews for two weeks learning the business – with no pay.

“The owner told Jerry that if he was willing to do that then he was on the payroll immediately,” said Mike. “That is when Jerry Brown broke into the Irrigation industry in 1977 selling Gifford Hills products.”

For the next decade Sue worked at the hospital while Jerry grew the center pivot dealership. Over the 10 years Jerry became known in the industry for his management skills and work ethic. However, he knew that they would have to make another move to reach some career goals that he had.

In the late 1980’s the Browns moved to Kansas where Jerry ran a dealership with two locations that he took to an elite level in a short amount of time. The dealership was in the Top Two for pivot sales in the nation for that particular manufacturer.
“Business was good, family life was good, but there was something missing and that was ownership,” said Mike. “Jerry wanted something to show for all of his hard work and knew that he was not going to get it at the dealership where he was working. So the Brown family was on the move again, this time to Pocatello.”

“So out of our garage in 1994 Wish Northwest Inc (Western Irrigation Supply House) was born,” Mike said. “The early days of the business were not easy, but my Dad was determined to make it work. He spent the majority of the time on the road doing sales calls and gaining the trust of the Northwest dealers.”

“For the last 21 years, Jerry and Sue have been working side by side growing Wish Northwest into the business that it is today, which now has two locations: one in Pocatello, Idaho and another in Kennewick, Washington,” said Mike.

Jerry and Sue have somewhat retired and moved to Arizona. Their son, Mike Brown, is now the General Manager of Wish Northwest Inc.
<< BACK TO IIEA PERSON OF THE YEAR PAGE