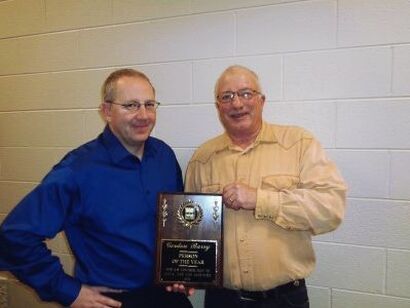 Gordon Barry, former general manager and part owner of Pipeco, Inc. has been selected as the Idaho Irrigation Equipment Association’s 2015 Person of the Year. The IIEA Person of the Year is an award given annually to a distinguished member of the organization that has provided many years of service and accomplishments to the irrigation industry and to the association. The award, which is voted on by the officers and board of directors, was given on January 6, at the IIEA membership banquet at the Nampa Civic Center. Mick McKenney, Pipeco employee and friend, made the presentation to Barry. Barry said, “I am honored to receive the award and recognition from the IIEA. I am proud to join the distinguished list of former recipients and consider this award a capstone to my rewarding career in this ever-changing and challenging industry.” He attributes much of his accomplishments and Pipeco’s success to his committed employees.

Barry, who grew up in Twin Falls and Burley, Idaho, attended Idaho State University and graduated with a business degree in Management and Organization. Barry started with Pipeco from its inception in 1978 at a leased site on Washington Street in Twin Falls. Over the course of the next 35 years, Barry grew the company to a peak of 38 employees in eight branches all across Southern Idaho following the Snake River from Fruitland on the Oregon border all the way east to Idaho Falls. Barry served on the IIEA Board of Directors in the late 1980s and was elected president in 1991. “As the building boom continued to increase along with Pipeco’s sales,” McKenney explained, “Gordon, or “GB” as we all affectionately called him, would constantly remind us in our manager meetings, “I don’t have all the answers, but I’ve been in this business long enough to know that this bubble will one day burst because there’s no way to sustain this growth.” These dire warnings finally came true when the recession hit in 2009. “GB spent many sleepless nights worrying over what course of action to take before deciding on instituting furloughs for everyone, including himself,” McKenney explained.
​
“For the first quarter of the upcoming year every employee would only work four days a week. GB cut his salary as well because he believed in leading by example,” said McKenney. “Perhaps the biggest, and in my humble opinion,” McKenny said, “the best contribution GB made with Pipeco was how he turned a small business into a family, and became a father figure to so many of us, especially those of us who really needed one.” He sold the company in 2014 to DBC Irrigation out of Colorado, a similar business focused on the residential and commercial sprinkler irrigation market. Gordon and his wife, Mary Lu, have been married for 44 years and have two sons and four grandchildren. Now retired, Gordon serves on the Idaho Golf Association board and continues to be a member of Rotary and Elks.
<< BACK TO IIEA PERSON OF THE YEAR PAGE