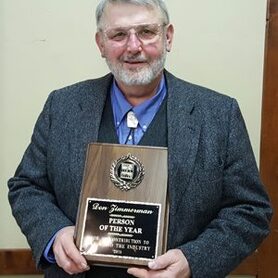 Don Zimmerman, Intermountain Territory Manager for Nelson Irrigation Corporation, has been selected as the Idaho Irrigation Equipment Association’s 2016 Person of the Year.

The IIEA Person of the Year is an award given annually to a distinguished member of the organization that has provided many years of service and accomplishments to the irrigation industry and to the association.  The award, which is voted on by the officers and board of directors, was given on January 11, at the IIEA membership banquet in Burley. Colleague Bob Hand made the presentation to Zimmerman.

Upon accepting the recognition, Zimmerman said, “My thanks to the Board and the IIEA for this recognition.  Since I first became involved with the irrigation industry, the IIEA has been a national irrigation leader in dealer/manufacturer development.  From the IIEA’s scholarship program as well as local, state and federal input for legislatures, this group has put the goals of water conservation and energy savings first.  I greatly appreciate what they have done to contribute to the industry.” Zimmerman, is a current resident of Walla Walla, Wash.

Zimmerman grew up on a 4th generation family farm and ranch west of Billings, Montana.  In 1975, he graduated from Montana State University College of Agriculture in Ag Business and Economics.  For two summers during college, he worked with Dekalb Ag Research at the Hybrid Wheat Research Facility in Billings.  Upon graduation, he went to work in Hutchinson, Kansas with Dekalb in the seed division.

In 1976, he moved to Boise, Idaho as District Manager for Dekalb and covered the territory of Washington, Oregon, Idaho and Utah.  In 1978, Zimmerman transferred to Lindsay Manufacturing, a new acquisition of Dekalb. In 1995, he joined Rain Bird and worked two years for them.  In 1997, Don joined Nelson Irrigation Corporation as Territory Manager in the Northwest and Prairie Provinces of Canada.

“Don has enjoyed the opportunity to be involved with the continuing education of dealership personnel,” said Hand in his presentation.

“Nelson Irrigation has provided me a great opportunity to pursue my interest in the art and science of getting water in the ground,” said Zimmerman.

Zimmerman has been attending the IIEA meetings for years.  He served on the IIEA Board of Directors and was elected as president in 2002.  He also served on the Idaho Water Users Association Board.

“The IIEA has been a model not yet duplicated for the past 46 years across North America. It is often imitated, but never duplicated. When it comes to the IIEA, the members have checked their egos at the door.  They have worked to improve the art and science of irrigation for its members and end users,” Zimmerman said.

Zimmerman and his wife, Sue, have been married for 35 years and have three children.  Don was a volunteer ski patrolman for 40 years at various ski areas, a trainer and instructor for avalanche and outdoor emergency care.

He has been involved with a local troop of Boy Scouts for the past 14 years and a member of the local Lion’s Club.

Zimmerman also serves on the advisory board for Walla Walla Community College. He is working with the Blue Mountain Community Colleges Precision Technology program in Pendleton.  He previously served on the advisory boards for Irrigation Association Agricultural Advisory Board, the USDA ARS in Kimberly, the Birthright of Walla Walla and his local parish council.
​
The IIEA was established in 1971 as a non-profit education organization and membership consists of more than 125 separate entities including wholesale suppliers, retail dealers, equipment manufacturers, public utilities and educational institutions engaged in serving Idaho’s agricultural and landscape irrigation equipment needs.
<< BACK TO IIEA PERSON OF THE YEAR PAGE