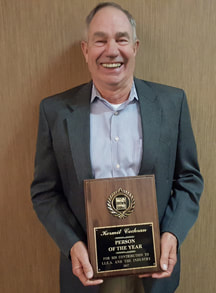 Kermit Cochran, recently retired AgDirect Territory Manager, has been selected as the Idaho Irrigation Equipment Association’s 2017 Person of the Year.

The IIEA Person of the Year is an award given annually to a distinguished member of the organization that has provided many years of service and accomplishments to the irrigation industry and to the association.  The award, which is voted on by the officers and board of directors, was given on January 10, at the IIEA membership banquet in Idaho Falls. Lance Eldridge, Rain For Rent, Idaho Falls branch, and longtime friend Gordon Jensen, Twin Falls, made the presentation.

Jensen, the 1997 IIEA Person of the Year, said, “The IIEA is a professional organization that has done a great deal to advance the water industry. It has brought hard working men and women from a highly competitive business and allowed them to share their knowledge, ideas and lives.  To be recognized by these people is one of the greatest compliments that can be bestowed on an individual.”

Cochran, who lives in Jerome, Idaho, was humbled by the recognition.  “I am honored to receive this award from this great organization that helps our industry and the next generation of Idaho Agricultural and Landscape Irrigation students through their great scholarship program,” he said.

Cochran, 67, was born in Shelby, Montana to parents Ronald and Evyelyn Cochran. After graduating from Shelby High School, he joined the Air Force. His basic training was in San Antonio, Texas. He was stationed in Minot, North Dakota and Vietnam. He ended his military service as a Security Policeman, in Great Falls, Montana.

In 1971, he married Patsy Claire.  They were blessed with three daughters, Tracy, Lisa and Megan. He is the grandfather to five grandchildren and another expected in July.

“It was in 1972 that he fulfilled one of his lifelong dreams of becoming a farmer,” said Eldridge. “He went to work for his sister and brother-in-law on their farm in Jerome.  With a desire to challenge himself, he branched out and started farming on his own in 1976.  He farmed sugar beets, beans, radish seed, grain, hay and beef cattle.” Eldridge reported.

In 1998, Cochran went to work for Reinke Manufacturing as a territory manager. In 2012, he took on the role of territory manager for AgDirect, an agricultural equipment financing company based in Omaha, Nebraska. Cochran said his philosophy was to always help the dealer or customer with whatever their needs were, no matter what time of year or what time of day. Cochran retired from work on January 2nd.
​
Cochran has been a Board Member of IIEA and until his retirement, he was serving as the IIEA Ag Membership Chairman. He has been an IIEA Scholarship Donor since 1999.  In 2010, he was honored as one of the Magnificent Seven Manufacturer Representatives by Potato Grower Magazine. During his farming career, he and his family earned multiple honors for being top producers. He is a past board member of the Farmers Home Administration loan committee and a past member of the Jerome County Conservation District.
<< BACK TO IIEA PERSON OF THE YEAR PAGE