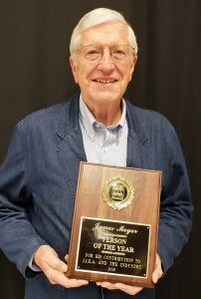 James Moyer, owner of Irrigation Design, has been selected as the Idaho Irrigation Equipment Association’s 2018 Person of the Year.

The IIEA Person of the Year is an award given annually to a distinguished member of the organization who has provided many years of service to the irrigation industry and to the association. The award which is voted on by the officers and board of directors, was given on January 9, 2019 at the IIEA membership banquet in Nampa, Idaho. His son, Dustin Moyer, made the presentation.

Moyer, 78, who lives in Meridian, Idaho, was humbled by the recognition. Upon receiving the recognition, he said, “I want to offer my sincere thank-you to all who have had a part in this award. I appreciate all the opportunities that this organization has offered me and know that IIEA members are a benefit to their irrigation communities. I am very grateful for the opportunity to be associated with this industry and to receive this honor.”

Moyer grew up in the agriculture community of Gooding, Idaho.  For more than 45-years he has done irrigation work. While working at an engineering company, then known as CH2M, he worked as a draftsman on the I-184 connector.  One of his associates at CH2M left the engineering company and persuaded Moyer to come to work in the irrigation field.

Moyer has since worked on numerous projects in the Treasure Valley, Sun Valley, Garden Valley and South-central Idaho. Some of the projects he has been associated with include the Kathryn Albertson Park, Boise LDS Temple, the Spurwing Country Club and Bridgetower Subdivision.

Through the Irrigation Association’s testing and accreditation programs, he became a Certified Landscape Irrigation Auditor (CLIA) in 1994 and then a Certified Irrigation Designer (CID) in 1995. He has participated in local and national meetings throughout his career. He has served on a committee for Boise City irrigation standards and he has taught irrigation classes for a local irrigation distributor and others.

Moyer has been very involved with the IIEA. He served as a Turf Sprinkler Division Chairman in 1994 and on the Board of Directors in 1995 and 1996. He also served as Winter Show Turf Chairman in 2012 and again in 2017 and Turf Membership Chairman from 2013- 2016.
​
The Idaho Irrigation Equipment Association was incorporated as a non-profit corporation in 1971. It currently has more than 130 members including wholesale suppliers, retail dealers, equipment manufacturers and financial institutions engaged in serving Idaho’s agricultural and landscape needs.
<< BACK TO IIEA PERSON OF THE YEAR PAGE