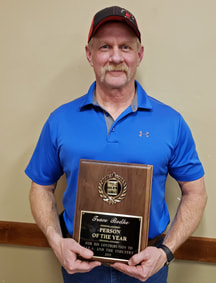 Trace Bedke, a longtime assistant manager for Butte Irrigation, has been selected as the Idaho Irrigation Equipment Association’s 2019 Person of the Year.

The IIEA Person of the Year is an award given annually to a distinguished member of the organization who has provided many years of service to the irrigation industry and to the association. The award, which is voted on by the officers and board of directors, was given on January 15, 2020 at the IIEA membership banquet held at Morey’s Event Center in Burley, Idaho. His friend and employer, Brice Beck, made a heartfelt presentation.

Bedke, 55, who lives in Burley, Idaho, was humbled by the recognition. After receiving the recognition, he said, “It was a complete surprise.”  Bedke arrived at the banquet to find his parents, Leon and Ruth, and several family members in attendance and realized he would most likely be named the Person of the Year.

“It was a great honor to receive the award that other very respected and impactful people have been awarded in the industry. The respect and relationships that I’ve gained over the years is very humbling,” Bedke said.

Growing up in Burley, Bedke graduated from Burley High School and then graduated from Boise State University with a degree in Business Management. After a three-year management position in a large company in Reno, Nevada, Bedke came home and began working for Butte Irrigation in February 1991.

Bedke has been very involved with the IIEA. He served as the Scholarship Chairman for many years and as a Winter Show Chairman. He has taken part in grading the scholarship applications for more than 20 years. Trace has always tried to attend the winter IIEA conferences and summer meetings of the association.
​
In his spare time, Trace likes hunting, snowmobiling carpentering and attending Boise State football games with family and friends. The Idaho Irrigation Equipment Association was incorporated as a non-profit corporation in 1971. It currently has 120 members including wholesale suppliers, retail dealers, equipment manufacturers and financial institutions engaged in serving Idaho’s agricultural and landscape irrigation needs.
<< BACK TO IIEA PERSON OF THE YEAR PAGE